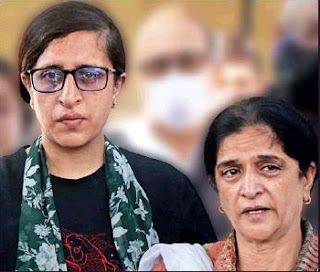 A daughter’s grief at losing her father to terrorist bullets exploded in a spirited expression of fortitude and fearlessness as Dr Samriddhi Bindroo swore not to shed a tear for the family’s “fighter”—Kashmiri Pandit businessman Makhan Lal Bindroo—and dared the gunmen to “come in front of me”.

Bindroo was shot dead in his pharmacy on Tuesday. Two other civilians were also killed in separate attacks by the Pakistan-backed TRF.

“You can kill one person, but you can’t kill the spirit of Makhan Lal,” Samriddhi is seen telling reporters in one of many video clips that went viral. “My father always said, ‘I’ll die with my shoes on’. I’m that father’s daughter. He gave me education while politicians gave you guns and stones,” she said.

You want to fight with guns and stones? That is cowardice. All politicians are using you, come and fight with education,” said Samriddhi.

Challenging the terrorists, she said, “The mister who shot my father dead while he was working... have a face-to-face debate with us. Then we will see what you are. You won’t be able to utter a word.”

Samriddhi also spoke about how her father didn’t cower in front of terrorists during the exodus of Kashmiri Pandits in the early 90s and stayed put to build his business — the landmark Bindroo Medicate pharmacy in Iqbal Park — and raise a young family. “I am an associate professor. I have started from zero… my father started from a bicycle, my brother is a famous diabetologist, my mother sits in the shop — that is what Makhan Lal Bindroo made us. A Kashmiri Pandit, he will never die.”

Recalling how she was the only Hindu girl in her class after the Kashmiri Pandit purge, Samriddhi said, “Despite being a Hindu, I have read the Quran. The Quran says you may kill the body, the spirit lives on. Bindroo will remain alive in spirit.” Social media cheered the braveheart, calling her the “daughter of Kashmir”. Srinagar deputy mayor Parvaiz Ahmed Qadri quoted Bindroo on his Twitter handle in a post that saw huge traction. “Dr Shraddha is a rockstar! Oh yes! Mr Bindroo will live on! Bravo!” tweeted radio jockey Sayema. Chetna Kaul, writer and filmmaker, wrote, “Wish the silent majority in Kashmir would show half these guts and throw the conflict enterpreneurs out.”

The other two victims in Tuesday’s terror attacks were a Srinagar-based pani puri vendor from Bihar, Virender Paswan, and Mohammad Shafi Lone, the local taxi association president of Hajin in north Kashmir’s Bandipora.

Apni Party chief Syed Mohammad Altaf Bukhari along with youth wing president and mayor of Srinagar Municipal Corporation Junaid Azim Mattu on Wednesday visited Bindroo’s residence. “Bindroo was a great person who even in hard times continued to serve the people of the Valley by providing them healthcare services. His killing is a huge tragedy that cannot be described in words,” Bukhari said.