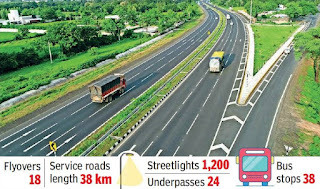 The project was awarded under the Design-Build-Finance-Operate-Maintain-Transfer annuity concession model.

State R&B minister, Purnesh Modi said that the work on the Tarapur-Bagodara link too would be completed in 100 days. He added that all villages in the state enjoyed road connectivity today.

Addressing the inauguration event, the CM said that the state government had not let Covid affect developmental works of the state. He added that the government had also tried to ensure that the difficulties of people were kept to the minimum during the period.

According to a rough estimate, around 40,000 vehicles ply on the road every day. Amreli has a strong Surat connection and buses daily commute on this road.

The 48-km stretch has 18 flyovers and 38 km service roads. It includes 24 underpasses, around 1.3 lakh square metres of reinforced earth wall, around 1,200 street lights and 38 bus stops as well as four truck lay-bys.

A 12-lane toll plaza, equipped with modern technology and other amenities such as ambulance, patrolling vehicle, crane, traffic, medical aid posts, drinking water facility, and toilets, has also been set up at Bochasan.

A 2.85km flyover has been built using a reinforced earth wall on the highway and is touted to be the longest of its kind in the state. The highway is also equipped with a surveillance system using PTZ cameras, video-based incident recognition system, speed measurement and variable messaging systems.