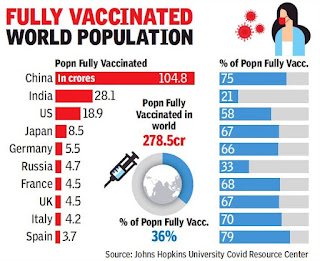 After China, that leads the field by a long margin, having administered more than 200 crore doses, India now comes second with 100 crore jabs, 58 crore more than the US.

Significantly, while the vaccination graphs of countries with significant populations like the US, Brazil and Indonesia remain flattish, India’s has been rising steeply.

In cumulative numbers, India again ranks second to China in fully vaccinating over 28 crore of its population, at least 10 crore more than the US and equal to the fully immunised population of Japan, Germany, Russia, France and UK put together.

India’s doses per 100 population has also gone up to 71, with countries like Cuba and the UAE leading with counts of 207 and 219. As vaccine-tracking websites like ourworldindata.com count doses, including boosters, individually, the same person may receive more than one dose leading to doses per 100 people to be higher than 100.