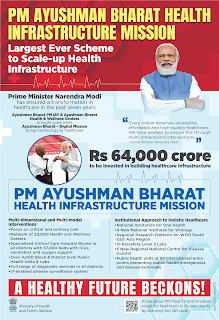 Aiming to give a major push to healthcare capacities in the country, Prime Minister Narendra Modi on Monday launched the PM Ayushman Bharat Health Infrastructure Mission from his parliamentary constituency of Varanasi with an outlay of about Rs 64,000 crore.

Touted as the country’s largest pan India health infrastructure scheme, the Mission is aimed at ensuring robust public health systems in both urban and rural areas, along with strengthening of surveillance and research so that states are capable of effectively responding to any public health emergency in the future and also combat disease outbreaks like Covid-19.

The scheme is in addition to the existing National Health Mission that addresses the health needs in rural and urban areas. Addressing a gathering at Mehdiganj here on Monday after launching the mission and inaugurating 28 projects worth Rs 5,189 crore for Varanasi, PM Modi said, “Projects like PMABHIM, which are being rolled out as India’s major step towards holistic healthcare while keeping health and wellness a priority, should have been done after independence. But, the previous governments kept the people deprived of facilities by not developing the health infrastructure.”

“Most of the areas had no hospitals. If hospitals existed, they lacked the facilities for accurate diagnostic tests, surgery and critical care. This led to crowding at big hospitals ,” he added.