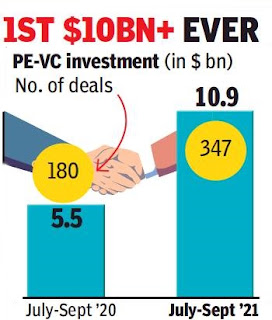 Indian startups haven’t had it so good in a long time. They raised nearly $11 billion in the July-September quarter, twice the money that they got during the same period last year, with fintech, edtech and SaaS (software-as-a-service) firms cornering nearly 50% of the funding. This is the first time ever that total startup funding has crossed $10 billion in a quarter.

Around 16 startups emerged as unicorns (valued at over $1 billion) across the three sectors this year, including BrowserStack, Cred, BhartPe, Vedantu, Eruditus and Upgrad. Over 30 startups have turned unicorns this year so far, including two decacorns (valued at over $10 billion) — Byju’s and Paytm. According to a PwC India Startup Perspectives report, the number of deals closed in the September quarter increased by 83%, and the value of those increased by 41% compared to the June quarter.

PwC India partner (deals & startups leader) Amit Nawka said, “Startups have leveraged the accelerated digital adoption seen among businesses and individuals alike to create newer business models and this is driving investor interest in a big way. We are seeing the average deal size increase, and quicker funding rounds have led to a surge in deal activity across sectors, since early this year.”

The fintech space has seen the maximum adoption and action across insurtech, wealthtech, neobanks and financial technology enablers. A nearly fourfold increase in funds raised to $4.6 billion worth of investments was witnessed in the first three quarters of the 2021 calendar year when compared to the same period last year. Six fintechs turned unicorns.

The Indian SaaS industry has more than 1,000 companies, with over 150 generating an annual recurring revenue (ARR) of over $1 million. A Nasscom report said pure-play SaaS firms have the potential to grow to $13-15 billion in revenue collectively by 2025. India has many SaaS unicorns, including Chargebee, Innovaccer, Postman, Druva, and Icertis.

Bengaluru and NCR continue to be the key startup cities in India, together contributing 76-78% of the total funding activity in the first three quarters of both the 2021 and 2020 calendar years, followed by Mumbai and Pune. The increase in funding activity in Bengaluru in CY21 (Q1, Q2 and Q3) is driven by existing startups such as Byju’s, Swiggy, Meesho, Unacademy, and Cred. The funding activity in NCR is led by Zomato, Pine Labs, BharatPe, OfBusiness and Delhivery. Mumbai attracted investments in the edtech and healthtech segments (Eruditus and PharmEasy raised significant capital, followed by Dream11, Gupshup and Infra.Market).

Research firm CB Insights estimates that in the first three quarters of the current calendar year, 371 new unicorns were added globally, as compared to 114 new unicorns in the previous year.