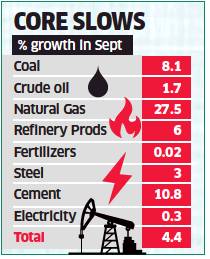 India’s infrastructure industries grew at a seven-month low as growth in most industries eased with economists expecting semiconductor shortages to impact industrial growth.

Growth slowed in five of the eight infrastructure sectors.

As per Madan Sabnavis, chief economist at CARE Ratings, the surprise factor here is coal, which registered high growth of 8.1% on top of 21% last year, which means that the shortage that was witnessed in October was more due to inventory management rather than production.

Six month growth rate has been 11.7% for coal. “Power growth was just 0.3% reflecting the inventory management on coal. This would also mean that there was relatively less industrial activity,” he said.