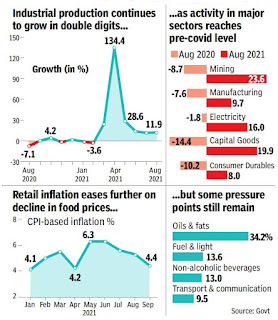 Retail inflation eased to five-month low in September as prices of some food products including vegetables moderated sharply, while the index of industrial production rose for the sixth successive month, providing much-needed relief, although experts said both numbers have some pressure points, which needed to be watched.

Separate data showed industrial production growth for August was at a robust 11.9%, marginally higher than the 11.5% recorded a month earlier in July.