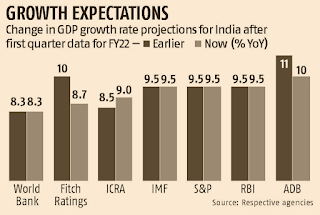 The International Monetary Fund has kept India’s growth forecast for 2021-22 unchanged at 9.5%, but lowered the global growth projection marginally to 5.9% from 6% earlier citing supply disruptions in advanced economies and worsening pandemic dynamics in low-income developing countries.

The multilateral organisation in its latest World Economic Outlook report has projected India’s economy to grow 8.5% in FY23.

It said the foremost policy priority should be to vaccinate adequate numbers in every country and prevent more virulent virus mutations.

IMF had in July slashed India’s growth forecast for FY22 to 9.5% from earlier projection of 12.5%, citing the severe second Covid-19 wave during March-May.

IMF’s growth projection is in line with the Reserve Bank of India’s GDP growth estimate for the current fiscal at 9.5% as also private agencies. The country is projected to become the fastest growing major economy again, overtaking China.

Global rating agency S&P, too, expects India to grow by 9.5% in FY22, while Moody’s has projected a GDP growth of 9.3% for the country.

Last week, the World Bank retained its India growth projection for FY22 at 8.3%, same as its June forecast, but said the increasing pace of vaccinations will determine India’s economic prospects this year and beyond.

Overall risks to economic prospects had increased, and policy trade-offs have become more complex, she said. She also flagged the divergence in economic prospects across countries. “Aggregate output for the advanced economy group is expected to regain its pre-pandemic trend path in 2022 and exceed it by 0.9% in 2024.”

According to IMF, speeding up vaccination of world population remains the top policy priority, while continuing the push for widespread testing and investing in therapeutics.

If Covid-19 were to have a prolonged impact into the medium term, it could reduce global GDP by a cumulative $5.3 trillion over the next five years relative to our current projection, the report said. According to IMF, beyond 2022 global growth is projected to moderate to about 3.3% over the medium term.