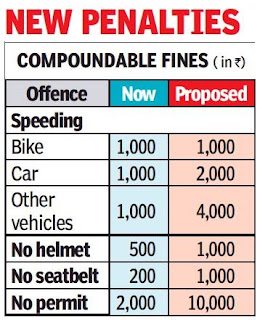 From next week, bikers not wearing helmets and those in car without wearing seatbelt are likely to be fined Rs 1,000. Such errant bikers may also face the risk of losing their licence for three months.

The state government cleared the decks for a hefty increase in fines for traffic offences as per the Motor Vehicle Amendment Act, 2019. It will be notified by Monday, an official said.

For drink driving, the penalty will be decided by court after prosecution, sources said. The new MV Act provides for maximum 6 months in jail and/or Rs 10,000 fine for first offence, while it is maximum 2 years jail and /or Rs 15,000 fine for a second offence.

We decided to reduce fines under certain sections that we felt were hefty,” transport minister Anil Parab said. He added that the state government decided to implement revised fines to bring in road discipline and reduce accidents.

The state government had deferred implementation of the MV Act 2019. The transport department, headed by Shiv Sena and even in the previous Sena-BJP government was not keen on implementing the new fines, and had called them ‘steep’ and demanded the Centre review them. Senior officials said the issue was under discussion and the state government reduced the amount under certain offences.

Sources said some fines proposed could be Rs.1,000 for fancy number plates, for vehicles with no reflector/tail lamps, for riding two-wheeler without helmet, for not wearing seatbelt, for speeding bikes and for driving without permits, and Rs.2,000 for speeding cars and for overloading.

An official said, “The final notification is likely on Monday when actual fines and punishment will be made public.” A senior transport official said, “Hefty fines will act as a major deterrent for offenders and will reduce crashes in the state.” The state has witnessed 12,000-13,000 fatalities on an average every year and the transport department wants to reduce this with Mission Zero Fatality.

A member of Mumbai Mobility Forum said several bike riders need to be disciplined and there was an urgent need for stringent enforcement against those not wearing helmets, riding triple seat, speeding and lane-cutting.

In January, state transport minister Anil Parab had said the state will procure 75 interceptor vehicles with speed guns that will be used by the RTO or police flying squads to nab speedsters in the Act.