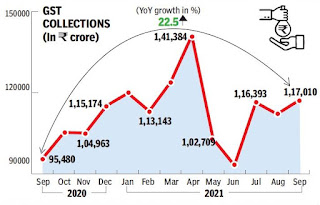 The latest data indicates a slowdown in collections from domestic transactions with Central and state GST mop-up increasing under 1% in the month of September, compared to the previous month.

It was largely IGST, which saw a 10% rise compared to August, that drove up overall collections, while cess on imported goods saw a decline. The government was, however, hopeful of an improvement in the coming months.

Even tax experts said the festival season will provide a boost.