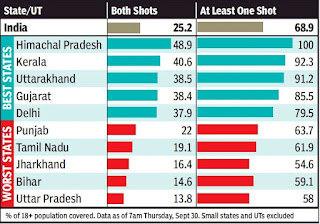 As many as 31 states and UTs have covered more than 60% of their adult population above 18 with at least one dose of Covid vaccine and 25% of this cohort has received the full two doses.

Overall, 69% of the total adult population of the country has received at least one dose of vaccine. As a share of the entire population, the coverage works out to 46% and India has administered 889 million shots. India’s shots per 100 population has risen to a respectable 63, with the world average at 79.4.

The increase in inoculation comes even as the number of districts with more than 5% positivity has dropped to 48 during the week ending September 29, as against 60-66 districts till last week, health secretary Rajesh Bhushan said.

Uttar Pradesh and Bihar, despite administering a significant number of doses, are among seven states with below 60% coverage. Other states with less than 60% coverage are Jharkhand, West Bengal, Meghalaya, Nagaland and Manipur. The large population of the heartland states might in part explain lower coverage. Six states and UTs have achieved 100% coverage of their respective adult population with the first dose of vaccines. This are Lakshadweep, Chandigarh, Goa, Himachal Pradesh, Andaman & Nicobar Islands and Sikkim.

The pick-up in vaccination can be seen with 10 states having inoculated more than 80% of the adult population with at least one dose, whereas the coverage of the first dose ranges between 60% and 80% in 15 states. At present, the daily monthly average for vaccination is close to 80 lakh. The Centre also stressed on the need to ramp up coverage of the second dose, particularly among health and frontline workers. The Centre has taken up the matter with specific states, officials said.