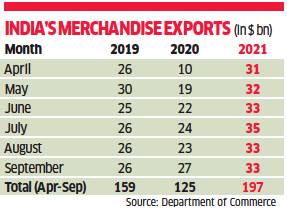 As India’s half-yearly export figure is published, it can be safely forecast that GoI’s ambitious target of $400 bn merchandise exports for the year is likely to be met without a hitch. With the Covid pandemic seemingly on the wane, Indian exporters have been riding the momentum of global economic recovery and a surge in commodity prices worldwide.

Between April and September 2021, India clocked merchandise exports worth $197 billion, 57% more than the same period last year and a decent 24% rise over the corresponding period in the pre-pandemic 2019-20. The sectors that are leading the pack include engineering goods, gems and jewellery, petroleum products, pharmaceuticals, chemicals — in that order, according to data available with the ministry of commerce and industry.

An internal assessment of the ministry that analysed data till the end of September suggests that several commodities surpassed 50% export target in the first six months, according to an officer privy to the document. These include engineering goods (51%), petroleum products (52%) and chemicals (57%), giving hope that India will be able to meet the $400 bn target — which was reckoned as far too ambitious when minister Piyush Goyal announced it three and a half months ago.

While robust exports have been a silver lining, the impact on India’s gross domestic product growth could only be marginal. The positives from an enormous export growth would be offset if consumption and investment — two bigger determinants for calculating output — remain fragile. The rising imports in April-September — 11% more than the corresponding period in 2019-20 — will also have an adverse impact on the GDP.

The GDP is calculated by adding the expenditures by three broad groups — households, business and the government. If one adds up consumption, investments, government spending and net export, the total output can be arrived at.

Pronab Sen who, as the chief statistician of India in 2007-10, got a first-hand experience of calculating the GDP, says exports contribute only about 14% of India’s output, far too low compared with other two drivers — domestic consumption, which powers about 62% of GDP, and investment, which contributes about 28%. The amount spent on imports is deducted from the total output.

So, while healthy export is a good sign for the economy, the government must immediately bring in policy interventions to boost consumption and investments, which in turn will power a faster GDP growth.

Virmani argues that states and the Centre must no longer be obsessed with short-term revenue maximisation via rate increases.

There is no ready data available to measure private consumption mid-year but most economists seem to be on the same page that the level of consumption in the country is still pretty low. Also, the private sector is reluctant to pump in money for building new projects.

While the economic survey in January predicted an 11% GDP growth for FY2022, RBI forecasts 9.5%. Ahluwalia says 9.5% is also unrealistic.

All these arguments make it clear that exports alone can’t power a robust GDP growth and sustain it in the coming years. Yet, the story of an upsurge in exports bodes well for the economy, particularly when the pandemic is not yet over and the likelihood of a third wave is hanging like a sword of Damocles. The question is whether $400 bn-plus exports can be sustained.

NITI Aayog Vice-Chairman Rajiv Kumar says the upswing will continue as many countries are shifting their sourcing bases from China as they want to reduce their dependence on one country. Also, the global trade as a whole is increasing, and so is the share of trade in global GDP, he says. He also says that the government’s recent Production-Linked Incentive Scheme, which incentivises companies to undertake incremental sales of products manufactured in India, will be helpful in this regard.

Clearly, India needs to promote export diversification to accrue long-term dividends. But in the short run, the focus should remain on boosting domestic consumption and investments — the key engines to drive economic growth on a sustained basis, which exports alone will fail to accomplish.