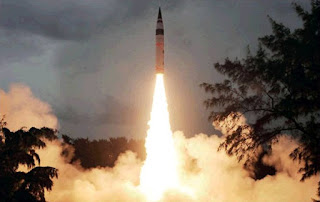 In a strong strategic signal to China amidst the continuing 17-month military confrontation in eastern Ladakh, India tested its most formidable missile, the over 5,000-km range Agni-V.

The “successful test” of the Agni-V, which brings even the northernmost part of China within its strike envelope, is in line with India’s stated policy to have “credible minimum deterrence that underpins the commitment to no first-use”, said the defence ministry.

“The missile, which uses a three-stage solid fuelled engine, is capable of striking targets at ranges up to 5,000 km with a very high degree of accuracy. It was tested for its entire range. The launch went off very well,” said an official. The test was significant on two counts. One, it was the first “user-launch” of the country’s first intercontinental ballistic missile by the tri-Services Strategic Forces Command after its induction into the armed forces. Two, this is the first time the missile, which has been tested seven times earlier, was launched during night.

On Wednesday, the missile with a 1.5-tonne warhead was launched from the APJ Abdul Kalam Island, off the Odisha coast, at about 7.50 pm. Flying at 24 times the speed of sound, the missile’s trajectory and flight parameters were constantly monitored by radars, electrooptical tracking systems, telemetry stations and ships before it splashed down in the Bay of Bengal, said the official.

DRDO is also working to develop `multiple independently targetable reentry vehicles' for the Agni missiles but it will take at least another two years for the multiple-warhead capability to be tested.

The existing single-warhead Agni-V in itself adds teeth to the deterrence posture against China, which has missiles like the Dong Feng-41 (12,000-15,000-km) that can hit any Indian city. China has also recently gone in for a huge expansion in new missile silo fields for launching nuclear-tipped ICBMs. As per the latest assessment of the Stockholm International Peace Institute, China now possesses 350 nuclear warheads and Pakistan 165, as compared to 156 of India.