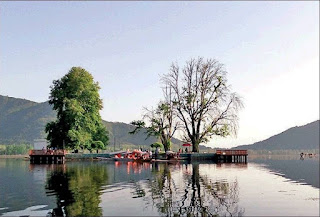 Char Chinar, the iconic tourist spot in the middle of the Dal Lake in Srinagar, is set to regain its glory that has faded over time on account of decay of three of the four majestic Chinar trees from which the island derives its name.

The J&K government has decided to translocate three fully-grown Chinar trees from elsewhere to the same spots on the island where the decayed trees once stood. The translocated trees, which have been identified by the state forest department and will be of the same height as the single intact tree, are expected to be translocated sometime in December 2021 or January 2022 as weather conditions would be ideal at the time.

The restoration of the island with 'Char Chinar' -- a famed backdrop of several Bollywood films shot in Kashmir -- will attract the locals and tourists who can once again enjoy a good view of the surrounding lake and mountains in shade of the four trees, as they break their 'shikara' ride on Dal for a brief stopover on the island.

J&K LG Manoj Sinha was particularly keen on restoring the 'Char Chinar' to its original glory and has held a series of meetings with forest department officials over the past year to discuss a successful way to do so. This is because past efforts to save the decaying Chinar trees have failed. In fact, an attempt in 2019 to revive the tourist spot by planting Chinar saplings also did not make much headway as to ring true to the name 'Char Chinar', the island would have to have four Chinar trees of the same height and girth.

The effort this time is to do the translocation scientifically. The forest department was asked to test the soil on the island so that the reasons for decaying of the trees could be identified and conditions created to ensure that the translocated trees survive and flourish.

J&K has been receiving a swarm of tourists this year, with September recording the highest arrivals at 12.82 lakh. Even August had 11.5 lakh incoming tourists, higher than 10.5 lakh in July.