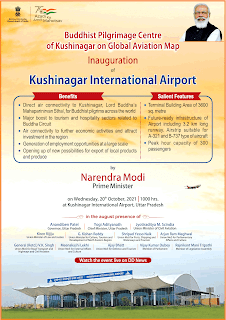 Uttar Pradesh will get its ninth airport handling scheduled passenger flights when Prime Minister Narendra Modi inaugurates the Kushinagar International Airport. A senior UP government official said in 2017 only four airports in the state had regular flights — Lucknow, Varanasi, Gorakhpur and Agra. While Prayagraj, Kanpur, Bareilly and Hindon have since been added that list, Kushinagar will get onboard Wednesday — indicating a more than doubling of operational airports in the recent past.

The state’s biggest airport — in Greater Noida’s Jewar — is going to become operational by mid-2024 and serve as Delhi-NCR’s second hub. Ayodhya is going to get Maryada Puroshottam Shri Ram Airport.

Once these two are ready, the number of international airports in UP will rise to five — up from the three that include Lucknow, Varanasi and Kushinagar.

Bareilly Airport, which opened a few months back, now has direct connectivity with Mumbai and Bengaluru and the jhumka city is now the aerial gateway to nearby industrial areas and the Kumaon hills. A senior UP government official said work is currently on at airports in 10 more cities — Aligarh, Azamgarh, Moradabad, Shravasti, Chitrakoot, Sonbhadra, Agra, Saharanpur, Noida and Ayodhya.

Of these, 95% work has been completed at Aligarh, Azamgarh, Moradabad, Shravasti and Chitrakoot, he said.

The state is developing an airstrip in Lalitpur, Bundelkhand, as an airport now. While as of now mostly smaller cities get flights to bigger cities or metros, the next round of aviation growth will come from smaller cities getting linked to each other.

“In 2017, the then four airports getting regular flights were connected to 25 cities (in India and abroad): Lucknow to 15, Varanasi to eight and Gorakhpur and Agra to one each. As of now, the eight airports are connected to 74 cities: Lucknow 21, Varanasi 20, Prayagraj 11; Gorakhpur eight; Agra five; Kanpur four; Bareilly three and Hindon two,” the official said.

The Central government’s regional connectivity scheme UDAN has led to improved connectivity by big airlines to smaller towns. The track record of smaller players in UDAN, however, remains patchy in terms of being able to start routes given to them or being able to operate them for too long. One of the most famous UDAN routes was Hindon-Pithoragarh that started in October 2019. However, the small player that got the route was not able to operate for too long.

Thanks to the big airlines’ better record of UDAN, UP, like other states, is developing both greenfield airports as well as developing old airstrips into airports.

Kushinagar, for instance used to have a 1.6-km-long and 23-metre-wide airstrip in an area of 101 acres. In 2011, the state government acquired 488 acres to expand this airport and along with the existing infra made available 589 acres. This airport has now been developed as an international airport with a terminal that can handle 300 passengers per hour and the runway expanded to 3.2 km in length and widened to 45 metres at a cost of Rs 260 crore.

Under UDAN, SpiceJet and Truejet have been awarded flights to connect Kushinagar with Lucknow, Kanpur, Varanasi, Prayagraj, Gaya, Bareilly, Saharanpur and Hindon (near Delhi). SpiceJet is likely to have a Delhi-Kushinagar flight, say sources. Being an integral part of the Buddhist pilgrim circuit, Kushinagar is looking at direct flights from several countries like Sri Lanka, Thailand, Nepal, Bhutan and Cambodia.