Pune: MahaMetro to ready reports for extensions by next year 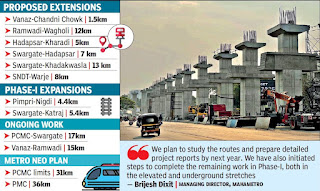 The Maharashtra state government has approved studies for a slew of expansion proposals slated for the second phase of the Pune Metro rail project.

The proposals cover an 80km network in Pune and Pimpri Chinchwad. The Maharashtra Metro Rail Corporation limited — the agency executing the project — said it would prepare detailed project reports for the extensions, including till Wagholi, Warje, Khadakwasla, Chandni Chowk and Hadapsar, and a new Hadapsar-Kharadi link, by next year.

In addition, MahaMetro said it was also studying the possibility of introducing light Metro — Metro Neo — service on two routes each in Pune and Pimpri Chinchwad.

At present, MahaMetro is working towards completing the first phase of the project, 33km across two corridors. Two extensions have already been proposed for the corridor between Pimpri and Swargate — an elevated route from Pimpri to Nigdi, and an underground stretch from Swargate to Katraj. Both extensions will add 9.7km to the 16km-long corridor.

“We plan to study the routes and prepare detailed project reports by next year. We have also started steps to complete the remaining work in Phase-I, both in the elevated and underground stretches,” MahaMetro MD Brijesh Dixit said.

Hemant Sonawane, general manager at MahaMetro, said the agency will coordinate with the civic administration to give the studies a push.

Hemant Rasne, chairman of Pune Municipal Corporation’s standing committee, said corporators were are keen on expanding the Metro services to connect newly developed areas to central parts. “We have given consent to take up study of many new routes in the past couple of years. Fund allocation will be done as per requirement,” Rasne said.

Bavdhan resident Amit Thakar said the Metro service will go a long way towards strengthening the city’s public transport network and said the project should be completed at the earliest.