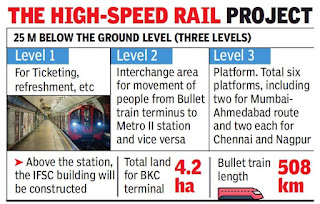 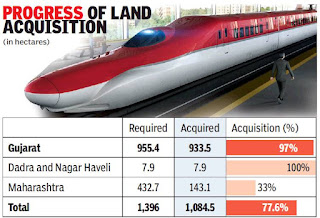 National High Speed Rail Corporation Ltd has not been able to begin work for the underground terminal station for Mumbai-Ahmedabad Bullet train project as it has not been able to get the possession of the land in Bandra-Kurla Complex even though more than three years have passed since state government approved the site for the project.

The land pocket of 4.2 Ha at BKC was allotted by state government on February 26, 2018 to NHSRCL, with the condition that the feasibility of International Finance and Service Centre should not be compromised. The state government also insisted that the cost of land shall be adjusted against the equity contribution of Maharashtra state government.

A source said, “NHSRCL has requested MMRDA to hand over the BKC land since September 2020 but there is no progress.” A railway board official said “NHSRCL designed the BKC station as integrated structure (Underground Station with IFSC structure above it) to take load of 60 m high building above it. The tender for BKC station was proposed to be floated in November 2018. Later on, MMRDA informed to raise the height of IFSC building to 95 M(AMSL), which required change in design.” The tender of the BKC station was finally issued on November 20, 2019 with the date of submission as 1 March 19, 2020. Due to pandemic and non-availability of revised design the date of opening was extended on several occasion between May 12, 2020 to August 31, 2020.

A senior official said, “NHSRCL couldn’t open the tender since the land is not handed over by MMRDA. NHSRCL has not choice but to repeatedly reschedule the opening date of tender The next date of opening of tender is now on December 7, 2021.” Also, there is a petrol pump belonging to BPCL, which also needs to be shifted for construction of this terminal. A meeting was held on April 24, 2018 with MMRDA and the matter regarding shifting of Existing BPCL’s Retail outlet from BKC and also arrangement of Alternate land to BPCL has discussed. After joint inspection on alternate land was allotted to BPCL on July 12, 2019.

An official said, “We deposited the money too on the basis of the estimates provided by BPCL for relocation on October 4,2019. However, the petrol pump could not be shifted, as MMRDA has built temporary Covid-19 hospital in the allotted land.

The National High-Speed Rail Corporation Limited has finally invited bids for the 21km long tunnelling work including 7km undersea tunnel. This is the second such tender in Maharashtra after Bandra Kurla station. Only Indian and Japanese companies can participate in the bidding process. The tunnel will be single-tube twin track tunnel with a 13.1m diameter. Total length of the tunnel is 20.37km including 7km under sea. The tunnel will cross Thane Creek and the survey works under the creek was done by underwater static refraction technique, said railways officials, who added that the depth of the tunnel will vary from 25m to 40m.

The NHSRCL is yet to acquire 22.32% of the total 1,396 hectares to be acquired for the project. Railways officials said that while the process for pillar work was already issued in Gujarat, this was the first tender in Maharashtra for the corridor and would facilitate the train operation. “We have invited the bids for tunnelling work of 21km underground including 7km undersea tunnel using Tunnel Boring Machine and New Austrian Tunnelling Method. The tunnel will be between Mumbai underground station at Bandra-Kurla Complex and Shilphata in the State of Maharashtra. said an official.

He added that land acquisition was 97% over in Gujarat while it was stuck at just 33% in Maharashtra. However, talks are on with the Maharashtra government to ensure that the work was completed in time.

The senior railways official said that work for the elevated corridor has begun and all tenders including those for the construction of stations have also been issued.