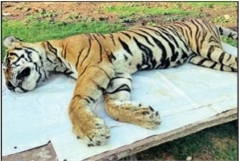 ST-3, which was relocated from Ranthambore Tiger Reserve to repopulate Sariska Tiger Reserve, was found dead on Monday.

The carcass of the 16-year-old tigress was recovered from Bhagani in the core area. A senior official said, “The tigress died due to old age. After constituting a medical board, the autopsy was conducted, following which it was cremated. ” Experts recalled the tigress was approximately two-and-a-half years old when it was brought to STR in 2009. Dinesh Verma Durani, founder and general secretary of Sariska Tiger Foundation said, “The tigress was daughter of legendry tigress Machali. ST-3 was among three cubs in the fourth litter of Machali. Though, the tigress was brought to repopulate STR, it never gave birth to any cub at the reserve. ”

The tigress became famous across the country in 2016 when a wildlife enthusiast captured its pictures carrying a leopard carcass in its mouth in Sariska’s Kala Kuan area. Recalling an incident, a forest staff said ST-3 was climbing a tree to catch its prey. When the leopard fell from the tree, the big cat jumped on it and killed it within a few minutes.

After the death of the tigress, there are now 24 tigers in the reserve, including seven cubs. A month ago, another 16-year old male ST-6 died due to old age . A forest staff said the forest department should review the tiger reintroduction plan before it is too late. “Out of all the big cats, male tiger ST-13 is missing for approximately the past 3 months."