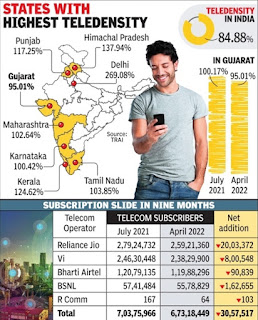 With remote working moving back to offices and schools and colleges going from laptops and mobile devices to classrooms, the need for additional mobile connections declined. As people reduced additional connections month after month since July, teledensity in Gujarat dropped from 100.17% in July 2021 to 95.01% in April 2021. According to the latest telecom subscription report from the Telecom Regulatory Authority of India, the number of subscribers fell from 7.01 crore in July 2021 to 6.7 crore in April 2022.

Industry players say the decline is because of the consistent reduction in number of mobile connections needed. “Since the pandemic began, most people bought and kept multiple connections for consistent internet connectivity because of remote working and online education. Subscriber numbers thus rose sharply as did teledensity. When educational institutes and offices reopened, additional connections began to be surrendered,” said a telecom industry source. This phenomenon has been seen in all the states over these months. According to the latest data from TRAI, teledensity was 72.9% in rural Gujarat and 119.53% in urban areas as of December 31, 2021.

In July, Gujarat was among eight Indian states with teledensities above 100%. Even though the state continues to be among the ten states in terms of highest teledensity, its share of subscribers went down. Telecom operators also attribute the reduction to tariff revisions and network problems. “Recently, tariff revision was announced by one telco, and most of them have raised tariffs. This impelled customers to opt out of additional connections. Some connections which were not cancelled were automatically disconnected after being unused for more than three months,” said a source.