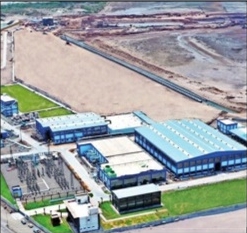 Chief minister Bhupendra Patel inaugurated the 100 MLD (million litres per day) desalination plant at Dahej in Bharuch district, which was built by Gujarat Industrial Development Corporation  at a cost of Rs 881 crore.

The plant will purify salt water and make it usable by industry in the region. This plant for industrial use is the first of its kind and largest in the country, a state government statement said. Of the total four PCPIR (petroleum, chemicals and petrochemicals investment regions) in the country, Dahej PCPIR is the only functional one. Spread over 453 square kilometres, the region is growing fast, the release said.

M Thennarasan, vice chairman and managing director of GIDC, said at present 454 MLD of water is being sourced from the Narmada river and Narmada canal. About 200 MLD is currently being used by industrial units. “Due to the limited availability of water and salinity, especially from January to June, water scarcities are likely to affect production. The desalination plant has been built as an alternative source of water for industrial units to meet demand of the existing and upcoming units in the region,” he said.

Construction work was awarded to the joint venture company of Larsen & Toubro and Tecton. Total construction cost is Rs 881. 19 crore. A special purpose vehicle, Dahej Desal Foundation, has been constituted by GIDC and the beneficiary industrial units for operation and maintenance of the plant.