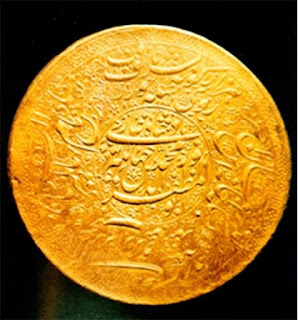 After an almost four-decade futile search for the missing “12kg gold coin”, touted as the world’s biggest coin ever minted, the Centre has renewed its hunt for the priceless artefact. It was last seen in the possession of the titular Nizam VIII of Hyderabad, Mukarram Jah, who purportedly tried to auction the coin at a Swiss bank, but India’s premier investigation agency, the CBI, failed to locate the coin that was passed on to Jah through his grandfather and last Nizam of Hyderabad, Mir Osman Ali Khan.

The last Nizam had inherited the coin minted by emperor Jahangir. Eminent historian, Professor Salma Ahmed Farooqui of HK Sherwani Centre for Deccan Studies, Maulana Azad National Urdu University, who conducted research on the history and inheritance of the world’s biggest gold coin, said it is priceless and Hyderabad’s pride. Now, renewed efforts to locate the coin have begun after 35 years. “In 1987, when Indian officials in Europe alerted the central government about the world-famous auctioneer Habsburg Feldman SA auctioning the 11,935.8gm gold coin in Geneva at Hotel Moga on November 9, through Paris-based Indosuez Bank’s Geneva branch, the CBI came into the picture. Investigations started and much information was unearthed,” Professor Salma said. She said that CBI officials donned the role of historians, building up on the history of the gigantic coin. Many CBI officials, who were part of the investigations are not in office anymore, so the search remained inconclusive. Former joint director of CBI, Shantonu Sen, in his book said that CBI officials found that Jahangir had minted two such coins; while one was presented to Yadgar Ali, ambassador of the Shah of Iran, the other had become the property of the Nizams of Hyderabad. Salma said that the CBI special investigation unit XI headed by a superintendent rank officer in 1987 registered an FIR under the Antique and Art Treasures Act, 1972.