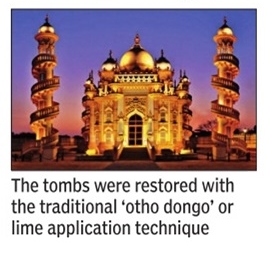 For years, this architectural marvel in Junagadh —mausoleums of Nawab Mahabat Khan II and his Wazir Bahauddin Hussain Bhar — built in 1892 and 1896 respectively — was covered in dust, its windows shattered and several parts corroded.

But these iconic tombs have been restored to their original glory, with the same method that was used to build them 150 years ago. Kuldeep Paghdar, assistant engineer of the tourism department, said they used the traditional ‘otho dongo’ method in which, according to him, no cement is used, only natural material like limestone is used. In ancient times, mixing the binding material was done in a chakki, which was adopted in the current restoration process too.

Started two years ago, the restoration project is now on the verge of completion, at the cost of Rs 7 crore.