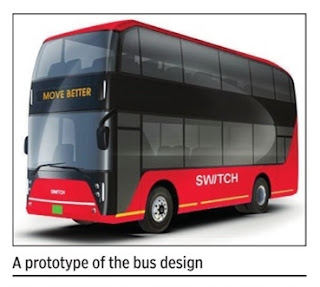 Mumbai’s first electric AC double decker is expected to be launched in the first week of August to coincide with the BEST Foundation Day on August 7. With the daily ridership now of over 31 lakh and set to increase by around 1-2 lakh, the BEST will require more buses to meet the increasing demand from commuters. The double deckers will provide a carrying capacity of 78-90 people per bus. With 900 e-double decker contracts already approved recently, the first lot of 225 twin-deck buses are expected by the year end. When contacted, BEST general manager Lokesh Chandra said that the prototype design of the double decker has been finalised and now the body building will be done over the chassis by the contractor. “The bus will have two staircases instead of the single one in the existing double decker. This will ensure smooth movement of passengers while boarding or alighting from the bus,” he said. He further said that the buses will be noiseless, electric and airconditioned, which will not just augment the carrying capacity but will also provide for comfortable rides. At present, there are 48 non-AC double deckers ferrying passengers on 16 routes across Mumbai. It has a good ridership on busy routes from CSMT to Nariman Point, Colaba to Worli, Kurla to Santacruz, etc. One of the most popular routes is the one from CSMT to Backbay depot. Once the twin-deck fleet size increases, more double deckers will be deployed on CSMT-Nariman Point, Churchgate-Colaba/ Cuffe Parade/ Nariman Point and on routes along Western and Eastern Express highways, LBS Marg, S V Road and P D’mello Road, he said. While the first lot of 225 double-deckers are expected this year, the next batch of 225 buses will arrive by March 2023 and the remaining 450 by June 2023. This is a part of BEST’s initiative to save the  city’s iconic double deckers which witnessed a sharp decline by 60% in the past two years -from 120 buses in 2019 to 48 in 2021 as most buses had completed their life span.