After centuries, ‘dhwaja’ to be unfurled at Pavagadh temple


When the trustees of Pavagadh-based Mahakali temple announced that Prime Minister Narendra Modi will unfurl a ‘dhwaja’ atop the shrine, many wondered why this took so many centuries to happen?

It was only after the trust put forward explanations that the matter turned clearer. “The ‘dhwaja’is unfurled on a mast on the ‘shikhar’ of the temple,” said trustee of the temple Ashok Pandya. However, the temple’s ‘shikhar’ was damaged when Pavagadh was conquered by Sultan Mohammed Begada in in 15th century, he said, adding that there was also a dargah over it making it unfit for unfurling a ‘dhwaja’. He further said that the dargah may have also come up around the same time. “It is called the Sadanshah Pir’s dargah. There are various stories, but I have no concrete information regarding it,” Pandya added. Ghanshyam Joshi, a retired college professor, who stays in Pavagadh and has keen interest in Champaner-Pavagadh history said that there were reasons to believe that the temple was damaged and the dargah came up after 1484, when Begada attacked Pavagadh.

Both Pandya and Joshi pointed out that the temple trust and the caretakers of the dargah had reached an understanding regarding the issue and the dargah was shifted to a location near the temple. “It is more visible now and more persons are visiting it,” said Joshi.

PM is scheduled to visit Pavagadh on Saturday morning. He will first visit the Bhairav temple before going to the Mahakali temple where he will perform prayers including worshipping the ‘dhwaja’ which will then be unfurled on the temple.

Modi is then scheduled to visit the Virasat Van developed by the forest department. State revenue minister Rajendra Trivedi called the event historic while addressing the media in Vadodara. He said that such an event will be held for the first time in 500 years. 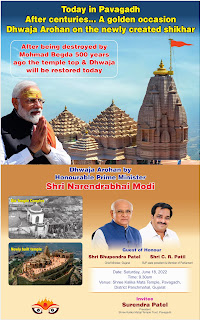