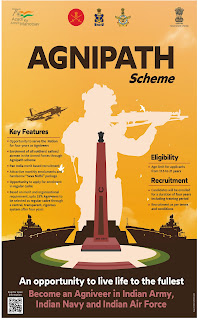 The government announced the radical and far-reaching ‘Agnipath’ scheme to recruit all new soldiers only for four years, deploying defence minister Rajnath Singh and the three Service chiefs to stave off criticism that it will hit the professionalism, ethos and fighting spirit of the armed forces as well as possibly lead to militarisation of civil society. Under the Agnipath scheme, approved by the PM-led cabinet committee on security, the process to recruit 46,000 soldiers, sailors and airmen this year will begin on an “all-India, all-class” basis within 90 days.

The ‘Agniveers’ will get a monthly salary of Rs 30,000 to Rs 40,000, with the 75% of them who get demobilised after four years getting a ‘Seva Nidhi’ exit package of Rs 11.71 lakh, half of which will be through their own contributions. The remaining 25% will be inducted into the regular cadres of the armed forces to serve another 15 years. The Agnipath scheme will also be “progressively opened” for women based on service requirements.

Rajnath Singh described it as a “transformative initiative” to usher in a more youthful profile in the over 14-lakh strong armed forces, with the average age of soldiers gradually being brought down from the existing 32 to 24-26, as well as make them modern, tech-savvy and well-equipped to deal with the myriad challenges ahead. “Don’t doubt the scheme. It will strengthen national security,” defence minister Singh said.

There is, however, apprehension that around 35,000 “trained-to-kill” soldiers being demobilised every year could prove dangerous if they remain jobless and frustrated.