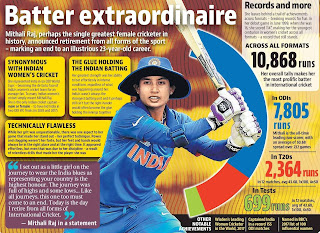 Mithali Raj, the most capped player and highest run scorer in the history of women’s cricket, India’s most succesful women’s captain, and a legend who inspired many young girls to take up the game, brought the curtains down on a glittering 23-year career on Wednesday.

She had earlier announced her retirement from T20 internationals. Mithali captained India in the ICC Women’s World Cup earlier this year in New Zealand, where India failed to qualify for the semifinals. She led India to the finals of two World Cups, 2005 and 2017, but the crown eluded her.

Mithali also represented India in 12 Test matches, scoring 699 runs. She scored eight international centuries and 85 fifties. Her innings of 214 against England in 2002 remains the second-highest individual score by a batter in women’s Test cricket.