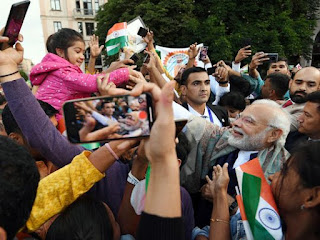 Modi arrived in Munich on Sunday to attend the G7 summit where he will hold meetings with G7 and partner countries and will hold discussions on several issues, including environment, energy and counter-terrorism. The PM interacted with the Indian community at Audi Dome, Munich. “The way crores of Indians have achieved big goals together is unprecedented. Today, every village in India is open defecation-free,” he said. “Electricity has reached every village and almost every village is connected by road. Today, over 99% people in India have a gas connection for clean cooking,” he added.

Modi also highlighted India’s growth story and mentioned various initiatives undertaken by the government to further achieve the country’s development agenda. He also lauded the contribution of the diaspora in promoting India’s success story and acting as its brand ambassadors.

“Today, we can proudly say India is the mother of democracy. . . The diversity of culture, food, clothes, music makes our democracy vibrant. India has shown that democracy can deliver and has delivered,” he said. “There was a time when people said India will take 10-15 years to vaccinate its population against Covid. Today, 90% of adults have taken both doses and 95% of adults have taken at least one dose. ” PM Modi also said 21st century India is at the forefront of Industry 4.0 and asserted that the country is shining at every front whether it is in the field of information technology or digital technology. He said India has the third-largest startup ecosystem and it is the second-largest mobile phone manufacturer in the world.