5G: India’s biggest spectrum auction to kick off on July 26 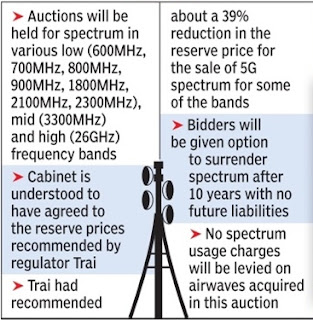 As India eyes transition to high-speed 5G telephony, the country is set to witness the biggest-ever auction of spectrum with the government putting up 72,000MHz of mobile airwaves on sale — the largest such quantity being sold at one go — adding new frequencies and bands in line with international trends.

The government hopes that the auctions, which will begin on July 26 and have a value of around Rs 4.3 lakh crore just at the reserve price, will prepare India for the next generation of mobile telephony as the world transitions to the era of machine-to-machine (M2M) communications, smart factories, remote surgeries, autonomous driving, immersive experiences, intelligent agriculture and education, as well as internet-of-things (IoT).

Prime Minister Narendra Modi has time and again stressed on the need for ushering in 5G for an enhanced digital governance, and this has seen the government roll out a liberal bailout package for the beleaguered telecom industry in September last year. The government hopes that companies such as Airtel, Reliance Jio, and Vodafone Idea will take a lead in making the transition to 5G telephony, which is likely to have a stronger case in the enterprise segment initially than in the consumer space.

Interestingly, the government has also paved the way for getting in Big Tech companies such as Google, TCS, Cisco and Ericsson into the 5G business, but being confined to captive networks for businesses with no interface into the consumer space. There are some caveats before this becomes a reality, though directionally this will come into force as soon as the rules and guidelines get defined.

“Enterprises setting up captive non-public network may obtain the spectrum directly from the department of telecom and establish their own isolated network. In this regard, DoT will undertake demand studies and thereafter seek Trai recommendations for direct assignment of spectrum to such enterprises,” the notice-inviting applications for spectrum auctions said.

Telecom minister Ashwini Vaishnaw said the 5G auctions will be the “beginning of a new era for Indian telecom”. 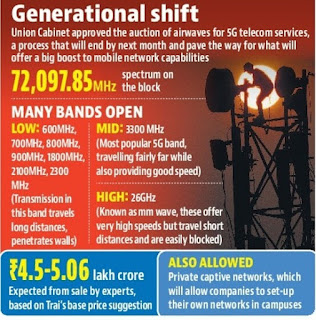