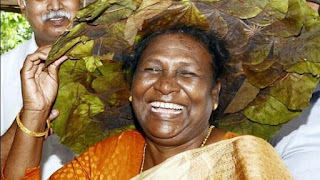 Poised for her entry to the Rashtrapati Bhawan as 15th president of the country with what appears to be winning numbers on her side, NDA nominee Droupadi Murmu reached the national capital where she called on Prime Minister Narendra Modi, home minister Amit Shah, defence minister Rajnath Singh and BJP president J P Nadda and expressed her gratitude to the top BJP brass for her nomination.

Murmu will be accompanied by PM Modi, other senior leaders of the NDA and parties supporting her while filing nomination papers on Friday around noon.

On her arrival at Delhi airport, she was received by Union ministers Arjun Munda, Gajendra Singh Shekhawat, Arjun Ram Meghwal and Delhi MPs of the BJP.