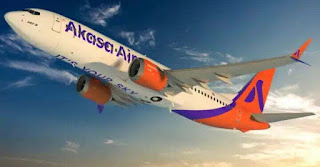 Rakesh Jhunjhunwala-owned Akasa Air has received the delivery of its first aircraft, a Boeing 737 Max, in Seattle. It has ordered a total of 72 aircraft and aims to get 18 planes by March 2023, according to a statement . “Flying an advanced, environmentally progressive 737 MAX fleet with greater fuel efficiency and lower operating costs will enable Akasa Air to profitably serve the Indian market while passing those savings on to its passengers,” said Stan Deal, president and CEO, Boeing Commercial Airplanes.

The airline founded by former Jet Airways chief Vinay Dube has already signed up 154 pilots,115 cabin attendants and 14 engineers. Of those, 26 pilots are already on the payroll.

The airline, co-founded by former IndiGo president Aditya Ghosh, is planning its first flight in July. It will shortly be called to operate a proving flight, which is a precursor to getting an air operator’s licence. Once it gets its licence, Akasa will be India’s seventh airline along with IndiGo, Air India, Vistara, SpiceJet, Go Airlines and Jet Airways, which recently got its flying licence back. AirAsia India is being taken over by Tata Group-owned Air India and will become its subsidiary.

Akasa, registered as SNV Aviation, had received the no-objection certificate on October 11.