Retail inflation eases in May to 7% 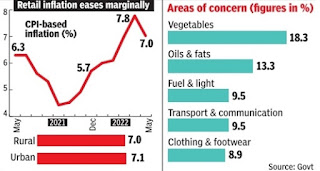 Retail inflation eased marginally in May due to a statistical base effect from the near eight-year high in April and moderation in food and some non-food prices. But it still remained above RBI’s upper tolerance level of 6% for the fifth consecutive month.

Retail inflation, as measured by the consumer price index rose an annual 7%, slightly slower than the 7. 8% in April but above the 6.3% recorded in May 2021. The food price index cooled a bit in May to near 8% from 8.3% in April. Urban inflation was higher at 7.1%, while rural recorded a 7% rise. Core inflation (minus food and fuel) moderated but hovered near 6% level, highlighting the entrenched price pressures.

Economists said several measures undertaken by the government — such as cut in excise duty on petrol and diesel, ban on export of wheat and Indonesia’s move to lift export curbs on palm oil — have also calmed prices in May and more impact would be visible in the June numbers. The data showed vegetables prices rose an annual 18.3% in May, oils & fats by 13.3%, and both fuel & light as well as transport & communication by 9.5%.

Inflation has emerged as a major policy headache across the world, prompting central banks to raise interest rates to tame price pressures. The RBI has raised rates by 90 basis points (100bps = 1 percentage point) so far and economists expect rates to rise in the months ahead. The war in Ukraine and the breakdown in supply chains have added to prices pressures globally.

The RBI has also raised its inflation projection for the current fiscal year to 6.7% from the earlier 5.7% and expects price pressures to remain elevated until December. Global crude oil prices have also remained volatile leading to uncertainty over the inflation trajectory. Along with retail inflation, wholesale inflation has also surged to record highs, scorching household budgets and putting pressure on policymakers battling to protect the ongoing recovery.