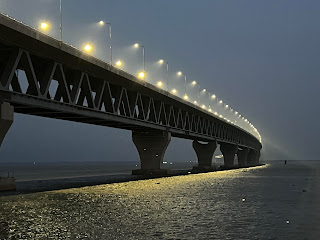 Bangladesh PM Sheikh Hasina inaugurated the long-awaited Padma Bridge, the country’s biggest development project since its birth in 1971, that is expected to give the nation’s development index a big boost and connect India directly to Dhaka, through road,rail and ports. The nearly 6.2km road rail four-lane bridge over the mighty Padma river is expected to directly impact the lives of at least 30 million people of the country, according to the government’s estimates.

The inauguration of the Padma Bridge carries a lot of significance as the structure was built entirely with domestic financing, defying speculations by several financial analysts if Bangladesh could mobilise the fund depending on domestic resources. In 2012, the World Bank cancelled a $1.2 billion loan to build Bangladesh’s longest bridge citing corruption, which the government said was never proven.

Hasina expressed deep gratitude to the people involved with the construction of the bridge. “I have no complaints against anyone, but I reckon those who opposed the construction plan and called it a‘pipe dream’, lack self-confidence. I hope this bridge will boost their confidence,” she said. “This bridge is not just bricks, cement, iron, and concrete. This bridge is our pride, a symbol of our capacity, our strength and our dignity. ”

Extending greetings on the achievement, the Indian embassy said, “The completion of this much-awaited project testifies to the courageous decision and visionary leadership of PM Sheikh Hasina. This success proves the decision of the PM and we firmly believe in it, which we have unwaveringly supported when Bangladesh decided to take this project forward. ”

The distance of Dhaka from the Indian border at Benapole by road will now be reduced by 70km and travel time by 4.30 hours. It will also reduce the Kolkata-Dhaka train journey time by half.

The Padma Bridge, connecting India, Nepal, China, Myanmar, Singapore and Thailand, will be a major link of the Trans Asian Highway Network. Of the TAHN’s 16 road routes, three run through Bangladesh. The rail link will connect another two routes.