Record trade deficit due to import surge in May 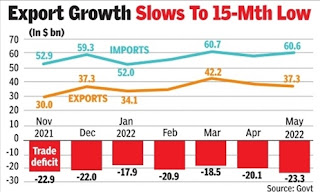 While oil imports rose almost 92% to $18.1 billion — accounting for almost 30% of the goods shipped into the country in May — gold was the other major driver, jumping 8.6 times to $5.8 billion to emerge as the second largest item in the import basket.

Besides, coal imports soared three times from just under $2 billion in May 2021 to $5. 3 billion last month. As prices soared, its share of India’s imports was just a little lower than electronics ($5.4 billion). Price of crude petroleum, coal and gold went up significantly after Russia’s invasion of Ukraine.