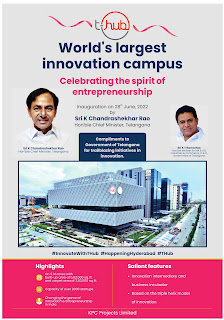 Seven years after Telangana government first kicked off start-up incubator T-Hub in 2015, one of the world’s largest innovation hubs, T-Hub 2.0 is all set to open its doors to start-ups in what is being touted as the world’s largest innovation campus in Happening Hyderabad’s IT hub of Madhapur on Tuesday.
The 18acre innovation campus, which will be unveiled on Tuesday evening by Telangana chief minister K Chandrasekhar Rao, will also house T-Works — India’s largest prototyping centre, and the IMAGE (Innovation in multimedia, animation, gaming & entertainment) Tower project. T-Hub, in its new avatar called T-Hub Phase-II, will be housed in an iconic 10-storeyed T-shaped building made of concrete, steel and glass spread over 3.75 lakh sq ft that has been designed by a South Korean architectural firm to resemble a spaceship.
“The new T-Hub building has been built at a cost of ₹400 crore with state government funds,” Telangana IT & industries principal secretary Jayesh Ranjan said on Monday. Ranjan said, T-Hub Phase II, which is five times bigger than the first phase of T-Hub, will have the capacity to house about 4,000 start-ups as well as other key elements of the innovation ecosystem, including venture capital funds,
trade offices of about 45 countries, centres of excellence and collaborative spaces. It will also house an Atal Innovation Mission Centre, which has been sanctioned by the Department of Science & Technology, a centre of the Startup India Mission, CII’s Centre for Innovation & Entrepreneurship, Centre of Excellence in Cybersecurity, among others.
Once the new T-Hub campus becomes operational from July 1, the 200-odd startups that are currently housed in T-Hub Phase I in IIIT-H campus, will move into the new building, he said. So far, T-Hub has helped incubate and support about 1,100 startups that have gone on to raise about ₹10,000 crore by way of funding, Ranjan added.
T-Hub CEO M Srinivas Rao said one entire floor in the new building will be dedicated to venture
capital funds, which have been a key missing piece of Hyderabad’s start-up ecosystem. “Telangana is the youngest state, but it has the most mature innovation ecosystem in the country. Hyderabad is all about pearl chains to blockchain and mangoverse to metaverse. From student entrepreneurs to soonicorns and unicorns, investors and trade commissioner offices, we want to have every stakeholder in this new T-Hub building,” said M Pannerselvam, vice-president and chief innovation officer, T-Hub.
The opening day will see the founders and top honchos of about 25 of India’s most celebrated
unicorns such as Bigbasket, Swiggy, Darwinbox, Urban Company, Meesho, Xpressbees, Dream11,
UpGrad, Zomato, Delhivery, RedBus, among others, as well as top guns of the funding ecosystem.