May GST Collections Up 44% YoY 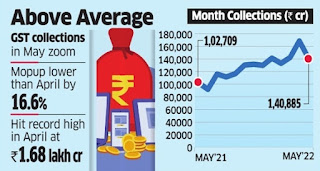 “The stability demonstrated by GST collections exceeding ₹1.4 lac crore over the past three months is a good indicator of the growth of the economy and ties in with the other macro economic indicators including the GDP numbers,” MS Mani, Partner, Deloitte India said.

This is the 11th month in a row that total GST mop-up has been above the ₹1-lakh-crore mark. And while the collection is lower than last month, experts say that this is not a case of worry, as traditionally April numbers, which pertains to collection in March, are always higher as taxpayers are paying quarterly based tax as well.

State wise trend showed that most of the states posted healthy double digit growth in the collection. In May, the government settled ₹27,924 crore to Central GST and ₹23,123 crore to State GST from Integrated GST. As a result, the total revenue for the month after settlement was ₹52,960 crore for the Centre and ₹55,124 crore for State GST.