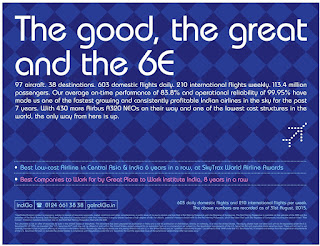 InterGlobe Aviation, the holding company of IndiGo airline, will retire nearly one-third of its total debt of Rs.3,912 crore, amounting to Rs.1,166 crore, with the initial public offer (IPO) proceeds, a top company official said.
The company has also reduced the public offer size to 23 million shares from over 26 million shares as one promoter will be selling less.
IndiGo president Aditya Ghosh said the entire Rs.3,912 crore debt it has is related to aircraft purchases and it was profitable in seven out of the nine years of its existence. IndiGo might have shown a negative net worth in its red herring prospectus (RHP), but Ghosh called it a “non-event“, adding that the company had no liquidity problems.
Ghosh was speaking at a press conference to announce the IPO of IndiGo's parent InterGlobe Aviation. The airline is India's largest in terms of market share, and seventh largest LCC in the world in terms of seat capacity . IndiGo, which operates a fleet of 94 A320 aircraft, has turned out a consistent profit since 2009. However, among the risks listed in the RHP is the negative net worth of Rs.3,393.87 million as of June 30, 2015.
Ghosh said that the company was confident of moving comfortably into the positive net worth zone. Since the filing of RHP, from July1 onwards, cash has been building up, he said. Ghosh added that liquidity was not an issue as the company was sitting on Rs.3,675 crore in cash as on August 31.
In the last four years, the airline has paid Rs.3,500 crore as dividend, including a recent interim dividend of Rs.1,135 crore to its promoters.

IndiGo's holding company InterGlobe Aviation will launch the LCC's Rs.3,200-crore IPO on October 27 to 29 in a price band of Rs 700-765. The IPO values the company at Rs 24,059 crore at the lower end of the band, and at Rs 26,293 crore at the higher end. Citigroup Global Markets India, Barclays Bank, Kotak Mahindra Capital, UBS Securities India, JPMorgan India and Morgan Stanley India are the bankers to this issue.