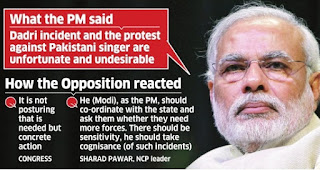 Prime Minister Narendra Modi said the lynching of a Muslim man in Dadri over rumours of beef eating and scrapping of Pakistani artiste Ghulam Ali's concert in Mumbai and Pune were “saddening and unfortunate“ incidents but pushed back at critics saying the Centre could not be held responsible for them.
In his comments, coming in the backdrop of writers protesting against the Centre for failing to curb rising intolerance, Modi asserted that BJP did not support such incidents. He added that the central government had no role in these incidents and criticized the BJP's opponents for indulging in communal politics.
“The Dadri incident and cancellation of Ghulam Ali's concert in Mumbai are sad and unfortunate. However, what does the Centre have to do with these incidents?“ he said in an interview to Bengali daily Ananda Bazar Patrika. BJP doesn't support these incidents. The opposition is accusing BJP of being communal. But by doing so, isn't the opposition responsible for this politics of polarization,“ he said. Modi said disputes and differences could be sorted out through dialogue. “Such controversies have occurred in the past as well. BJP has always opposed pseudo-secularism. Today , these people are again creating a controversy out of an unfortunate incident. It's possible to find a solution to these issues through dialogue,“ he said.
The comments are Modi's most detailed reaction in the context of the Dadri lynching.Shiv Sena's opposition to the Ghulam Ali concert and murders of rationalists led to writers returning Sahitya Akademi awards and criticism of the government for failing to curb a climate of growing intolerance.
Modi was under attack for not coming out to flay the Dadri killing or Sena's strong-arm tactics against organizers of Ghulam Ali's concert and former Pakistani foreign minister Khurshid Mehmud Kasuri's book launch, as well as for not acting against members of his government and party who made provocative statements in the wake of the Dadri killing.
Earlier, while addressing an election meeting in Bihar, Modi had touched upon the issue by endorsing President Pranab Mukherjee's exhortation to protect “core values“ -a pitch which was clearly prompted by the killing of Mohammad Akhlaq for allegedly eating beef.
But while he made plain his anguish over the Dadri violence, he hit back at the opposition which he accused of attempting to exploit the recent incidents and whip up communal sentiments through pseudosecular politics. Modi's comments were predictably rejected by opposition parties with Congress saying the PM was being selective and had been slow to react.