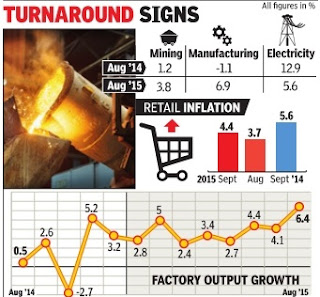 Industrial production growth accelerated to a near three-year high in August on the back of robust manufacturing, providing evidence of a pickup in the economy with nascent signs of recovery in investment.
The Index of Industrial Production (IIP) rose 6.4% in August, compared with 4.1% in July and 0.5% in August last year. Industrial output grew faster last in October 2012, when it was 8.4%. For a government that faced criticism of late for a slowdown in reforms, causing recovery to remain patchy, the latest data will provide some cheer.
India's economic growth slowed to 7% in the April-June quarter from 7.5% the previous quarter, but firmer industrial output numbers in the last three months provide evidence of a change in the trend.
While inventory build-up ahead of the festive season would likely boost production, the larger-than expected half-percentage-point reduction in interest rate by the central bank could provide an impetus to demand.
In terms of industries, 15 out of the 22 industry groups in the manufacturing sector posted growth, indicating a broad-based recovery. The rebound in industrial production was driven by solid 6.9% growth in manufacturing, which has a 75.5% weight in the IIP Mining output rose 3.8% in September, while electricity generation increased 5.6%.
Industrial output was at 4.1% in the April-August period, com pared with 3% a year earlier. Capital goods production rose 21.8% in August and 7.4% in April-August, providing the much-anticipated evidence that government spending was beginning to show up. Consumer goods production showed the divergent rural and urban situation. Overall, output was up 6.8% in August, driven largely by a 17% rise in production of consumer durables, pointing to the robust urban demand.Production of consumer non-durables, a barometer of rural demand, rose 0.4%.
September is likely to be also strong with a near 10% rise in car sales pointing to firm demand.
Among sectors, gems and jewelry, electricity, mining and apparel contributed to growth while steel and instant food mixes were the slowest growing.