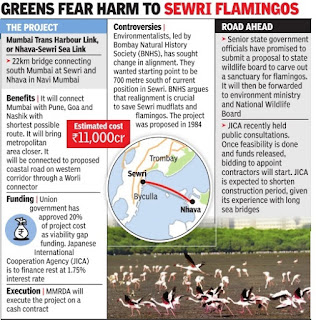 In yet another blow to the much-delayed Mumbai Trans-Harbour Link (MTHL) project, the national green tribunal (NGT) has suspended its CRZ clearance, granted in 2013, and has decided to set it aside completely if clearance is not acquired afresh within six months by the project's proponent, the MMRDA. The NGT also wants environmental authorities to decide if fresh green clearance is needed as per 2006 rules for the 22 km sea link project between Nhava in Navi Mumbai and Sewri.
According to the NGT, the procedure for CRZ clearance was not followed properly by the MoEF and the Maharashtra Coastal Zone Management Authority (MCZMA) as per the latest notification issued in 2011 and there were discrepancies in the amount of marine areas proposed to be affected due to the project.
Also, the proximity of the Karnala bird sanctuary , said the NGT, was not prominently considered, besides several other flaws such as a lack of studies on marine impact, requirement of noise barriers, effect on the habitat of flamingos and a comprehensive environment impact study .
“As a result, we set aside the (project's) CRZ clearance once its suspension period gets over and is still not replaced by a fresh CRZ clearance,“ the NGT bench headed by Justice V R Kingaonkar and expert member Ajay A Deshpande said. “We do not want the project to suffer because of further delays and hence want fresh clearances to be processed in eight weeks' time.This is mainly to avoid adverse effects of the project on mangroves, flamingos and mudflats, besides other impacts.“
“We direct that the MoEF shall take a decision independently on merits, without getting influenced by any of the observations made in this order... In the meantime, the CRZ clearance granted to the project stands suspended and is kept in abeyance for six months hereafter,“ the order said on an appeal made by environmental activist Dileep Nevatia.
According to Nevatia, the NGT has taken into consideration the point that the areas mentioned to be affected by the project in the CRZ and forest clearance applications varied by almost 250%. “Also, the provisions and plan for noise barriers, along with those for the viaduct, were not submitted.Studies related to impact on tidal water currents, marine life and flamingos were not done,“ he said.
Nevatia pointed out to the NGT that the environmental impact assessment (EIA) report was done rapidly and not comprehensively .