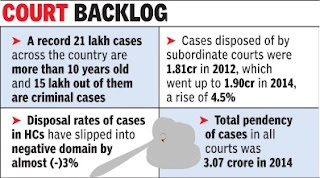 The attempt to initiate transparency in justice delivery has failed to bring cheer to poor litigants. More than 28% of the 2 crore case pending in subordinate courts are over five year-old, shows the latest statistics of the National Judicial Data Grid.
It's not surprising that of the total pendency , a record 21 lakh cases across the country are more than 10-year-old, and 15 lakh out of them are criminal cases where many undertrials remained behind bars even before their cases came up for trial.
The Supreme Court-monitored e-courts project has brought in several changes in the justice delivery system. Most of the 15,000 courts in the country have been computerized and connected to the NJDG. A daily update on cases is reflected on the grid which is now open to public.
Though the performance of 24 HCs are not reflected on the NJDG, in response to a Parliament question, law minister Sadananda Gowda had given out some statistics that showed a dismal perform ance. The disposal rates of cases in HCs have slipped into negative domain by almost (-)3%--from 17,86,170 cases disposed of in 2012 to 17,34,542 in 2014.
The performance of district and subordinate courts have been still better than the HCs. Cases disposed of by subordinate courts were 1,81,97,153 in 2012, which went up to 1,90,19,658 in 2014, an increase of 4.5%.However, the better performances of apex court and the subordinate courts did not result in any major reduction in pendency . The total pendency of cases in all courts was 3.13 crore two years ago, which remained at 3.07 crore in 2014. The reduction was a little over six lakh cases during this period.
The conditions of undertrials have not improved either. Over 66% of the nearly 4 lakh prison population is undertrials, a majority of them booked for petty offences and who cannot afford a lawyer and obtain a bail . This despite the fact that the apex court had in a judgment on September 5 last year set a deadline of two months to release all undertrial prisoners those who qualified as per its order.