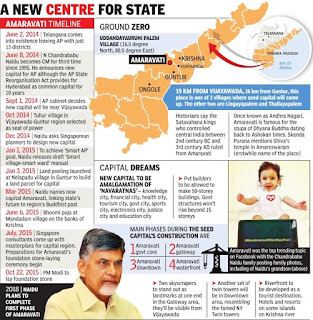 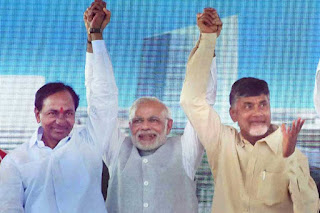 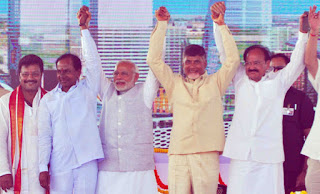 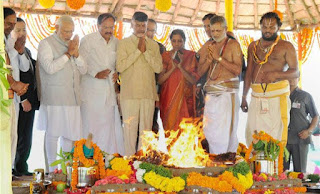 Decades from now, when Amaravati truly becomes a world-class city, Vijayadashami of 2015 will be remembered as a milestone in the history of not just Andhra Pradesh but also of the country, said Prime Minister Narendra Modi at the foundation stone laying ceremony of the new capital on Thursday.
The fact that Modi's presence brought N Chandrababu Naidu and K Chandrasekhar Rao -two antagonistic chief ministers of the states born out of erstwhile Andhra Pradesh's bifurcation -on one stage, too was no mean feat. On Thursday, Naidu and Rao seemed to share a rare rapport not seen since they split in 1999.
However, even as the PM's lofty idea was received well, there was a dampener when he failed to announce the much-expected financial package to rebuild the truncated state and build Amaravati -a futuristic and immensely ambitious project that will require thousands of crores of rupees to develop.Responding to Naidu's public plea for financial help, Modi said he would fulfil all promises made in the AP Reorganisation Act in letter and spirit.
The greenfield capital city will come up on 33,000 acres of rich agricultural land in the Vijayawada-Guntur region at the nondescript Uddandarayunipalem village on the banks of the Krishna in Guntur district.The PM handed over toNaidu two decorated pots -one containing the water of the Yamuna river and the other soil collected from the Parliament House premises.
“I came here with soil and water from the national Capital just to say that the central government is with Andhra Pradesh and the Chandrababu Naidu-Modi combine will make every dream of AP a reality,“ Modi said. More than two lakh people, mostly farmers, attended the meeting that saw Modi and Naidu heaping praise on each other.The PM lauded Naidu's initiative to invite KCR.
Modi also hit out at the bifurcation process initiated by the previous Congress-led government and saw “political expediency“ behind the division of Andhra. “The division was done in a hurry and without any consultation. Innocent people died and private property was damaged for political gains,“ he said. The remark might have made KCR uneasy as he had spearheaded the Telangana movement.