INDIA: The Most Attractive International Destination

In an endorsement of India's fundamentals, almost one-third of the respondents in a survey by EY ranked India as the most attractive market this year, while 60% placed it among the top three investment destinations. China was considered India's main competitor.
The `Ready , Set, Grow: EY's 2015 India Attractiveness Survey' is based on the responses of 505 global decision-makers collected during March and April. Business leaders said they found India's macroeconomic and political stability, FDI policy and ease of doing business more attractive in 2015 than last year, according to the survey , indicating that the government's drive to improve business was yielding results. Labour costs, the domestic market and macroeconomic stability were cited as the most important factors in making India attractive. Tax and regulatory reforms, regulatory compliance cost and transport infrastructure scored low.The government said it was working on those issues.
Established investors are more confident about India's attractiveness parameters than those who are still exploring the country for opportunities. “Manufacturing has regained its share in FDI capital flows in 2014, amounting to approximately 46%,“ the survey said, suggesting that the high pitch `Make in India' initiative seemed to have had some impact. “Investors are most optimistic about the sector, with 62% of those interested to expand or enter India over the next year saying that they plan manufacturing activities.“ Among the respondents, 55% were aware of the Make in India programme and 69% of them said they were likely to invest in manufacturing in the next five years.
In the first six months of this year, FDI capital in manufacturing increased 221%. After a steep fall in 2013, FDI in manufacturing has grown at its fastest in seven years. In 2014, investors announced plans to “invest a total of $11.4 billion in 192 FDI projects, creating more than 67,000 jobs,“ the study stated. “Over the last year, the improvements in India's macroeconomic indicators, accompanied with the ongoing efforts to revitalise growth, have offered new hope to investors,“ said Rajiv Memani, EY Chairman of the Global Emerging Markets Committee and India Regional Managing Partner.The EY report says that while investors are cautious about the business environment in India, the overall outlook is positive due to the improved economic growth and investor friendly moves by the government. 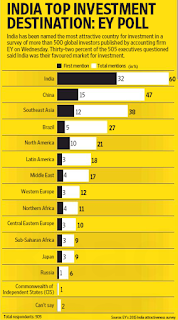 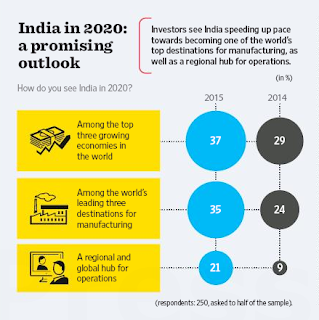 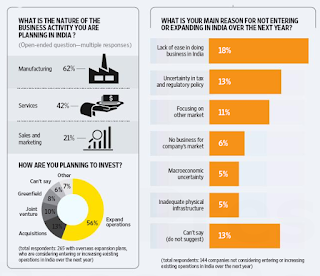 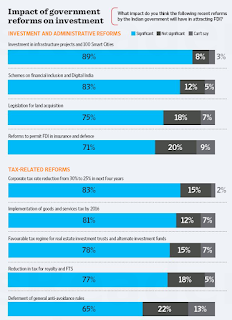