Maharashtra has topped a hospitality survey conducted by global hotel consultancy HVS, which ranked Delhi and Goa in the second and third places.
The India State Ranking Survey 2015 analysed the tourism potential of all the 30 Indian states, assessing their competitiveness on the basis of 12 key parameters, including luxury tax on hotels, state expenditure on tourism, tourist visits, presence of branded hotels, effective marketing and road and railway infrastructure. HVS conducted the survey for the World Travel & Tourism Council-India Initiative (WTTC-II). “The state (Maharashtra) benefits from a strong economy , good infrastructure, presence of a sizeable quantum of branded hotel rooms and a variety of demand generators to occupy these rooms,“ said the report of the biennial survey released on Tuesday .
This year, HVS added `ease of doing business' as one of the parameters for the survey to reflect each state's suitability for attracting investment and propagating development.
While Delhi slipped to the second position this year, Goa maintained its third rank in the survey.
Higher luxury tax, lack of single-window portal for ease of doing business and security issues are some of the reasons why Delhi is losing tourism business to neighboring states, the report said. “Additionally , Delhi's state expenditure on tourism, when viewed in absolute amounts, despite an increase since 2013, still lags behind states such as Jammu & Kashmir, Goa and Gujarat, among others,“ it said. 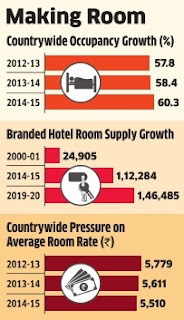