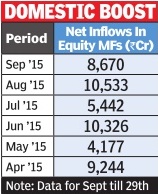 Equity mutual funds (MFs) have used the stock market correction, which followed the crash in global markets to significantly ramp up their share purchases, making net investments of about Rs.19,200 crore or nearly $3 billion between August and September, the highest ever for a two-month period.
Significantly , over two-thirds of these investments were made after the August 26 rout in stock markets. Equity MFs made net investments (higher purchase of shares than sales) of around $2.3 billion since August 26, data showed. While the sensex has lost 6.6% since August, the broad based Nifty declined 4.6% during the period.
Since real estate and gold have not done well in the last two years, investors are opting for equities, say experts. The outlook for equity markets has turned quite positive following the moderation in interest rates and weak commodity prices, he says. Even as FIIs are pulling money out of stocks, fund houses continue to increase their exposure to equities.