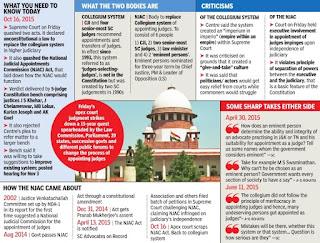 The Supreme Court struck down the National Judicial Appointments Commission (NJAC) and ordered revival of the SC-scripted two-decade-old `judges-selecting-judges' collegium system, rebuffing a unanimous Parliament decision to bring transparency in appointment of judges and potentially setting the stage for a confrontation between the executive and the judiciary.
A five-judge bench, by a 4-1 majority declared the 99th constitutional amendment and the consequent legislation NJAC Act as unconstitutional on the ground that the NJAC had the law minister and two eminent persons as members who could join hands to reject the proposals of the judiciary , represented by the Chief Justice of India and two senior most SC judges. Under the NJAC, any two members can veto a proposal.
The court held that the constitutional amendment and NJAC was a sure recipe for political meddling and executive interference in judicial independence, which was part of the inviolable basic structure of the Constitution.
However, each judge acknowledged that all was not well with the collegium system. The bench asked the government and petitioners to suggest in writing how to improve the system. The Supreme Court order striking down the NJAC marks a blow to attempts to end the widely criticized collegium system.Seeking a review by a larger constitution bench is not an appealing option for the government as such scrutiny is unlikely to result in reversal of the order. The other option is for the government to call an all-party meeting to save the NJAC. Although the 99th constitutional amendment bill was passed unanimously , whether the same kind of solidarity can be achieved afresh on this looks uncertain. Ties with the opposition, particularly Congress, have since deteriorated sharply .
Four judges -Justices J S Khehar, Madan B Lokur, Kurian Joseph and Adarsh Kumar Goel -were unambiguous that inclusion of a politician (law minister) in the body for selecting judges was fraught with the danger of serious interference with the independence of judges. They recalled how the Indira Gandhi regime in the 1970s had advocated appointment of `committed' judges. With this, the collegium system of appointment of judges scripted through two SC judgments, one in 1993 and the other in 1998, gets revived. Under this system, selection of judges to the SC is done by a body of five judges -the CJI and four senior-most judges of the SC. High court judges are selected by the HC collegium in consultation with the chief minister and the governor and sent to the SC, where a panel of the CJI and two senior-mos judges vet it before sending it to the government for appointment.
Justice Chelameswar struck the lone dissent note and upheld the 99th constitutional amendment, terming it the right way of reforming the appointment process of judges. He recalled the infamous ADM Jabalpur case of 1976 when the apex court had declared that right to life could be suspended during Emergency and said, “In difficult times, when political branches cannot be counted upon, neither can the judiciary .“
Referring to “bad appointments“ like Justice P D Dinakaran, Justice Chelameswar said, “Fiasco created in Dinakaran case would justify the participation of civil society in the process to eliminate from the selection process the maladies involved in the process.“ He said a comprehensive reform of the collegium system was overdue as there were many earlier instances when the system, which has no accountability , had failed and recalled the names it had recommended after the executive pointed out mistakes in the choice.