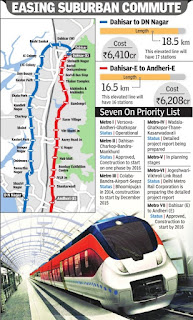 The Maharashtra state cabinet gave its nod to build two parallel elevated Metro routes--Dahisar to DN Nagar and Andheri (E)-Dahisar (E) --to decongest public transport in the western suburbs.
The two lines, expected to be built at a total cost of Rs.12,618 crore, are scheduled to be completed by 2019. Prime Minister Narendra Modi will perform the bhoomipujan for both Metro corridors on October 11.While the Dahisar to DN Nagar stretch is part of the Metro-II (Dahisar-Charkop-Bandra-Mankhurd), the route in the east, is the Metro-VII route that will run along the Western Express Highway .
Tariffs for the two routes are proposed to be kept low, with a fare of Rs 10 for the first 3 km, Rs 20 for 3-12 km, and Rs 30 beyond 12 km. This is because a major share of the cost will be borne by the Mumbai Metropolitan Region Development Authority (MMRDA), state and the Centre, while bank loans are proposed to be used only for the rolling stock. To cut costs further, it has also been proposed to source power for the two lines from MSEDCL on a no profit no loss basis.
The Dahisar to DN Nagar stretch is expected to cost around Rs 6,410 crore. Of this, MMRDA has proposed to spend Rs 1,892 crore from its own kitty , while around Rs 1,050 crore will be provided by the state and central governments.The state government and the MMRDA have decided to raise about Rs 1,468 crore for the land component.
Similarly , the Dahisar (E)-Andheri (E) project is proposed to be built at a cost of about Rs 6,208 crore. Of this, the MMRDA and the state government will spend Rs 2,320 crore while the Centre is likely to extend a loan of about Rs 1,036 crore. For the land component, MMRDA and the state government will raise funds of around Rs 2,246 crore. All the fund components will be raised as dedicated urban transport fund. Metro projects being priority public projects, it will be ensured that the expenses on establishment do not go beyond 2% of the total project cost. Construction of both lines will start in January 2016.
Meanwhile, the cabinet also gave in-principle nod for commercial exploitation of BEST bus depots to convert them into state-of-the-art complexes with bus facilities and integrate the Metro lines with various transport modes such as suburban rail, autos and taxis.
The state government and MMRDA also plan to start construction of the underground Colaba-Bandra-Airport-Seepz Metro in December. This route will be funded by Japanese International Cooperation Agency . Bhoomipujan for this route was held last August.