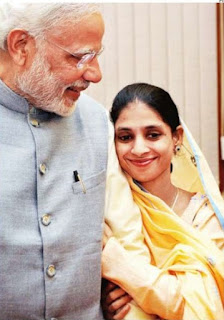 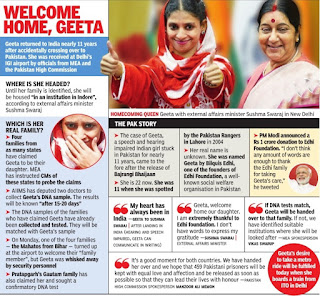 After more than a decade-long stay in Pakistan, Geeta, the hearing and speech impaired, arrived in the country to a grand reception at Delhi airport on Monday. She was received by both Pakistani and Indian officials. But Geeta's story soon took another twist after she could not recognise the Mahato family she had earlier identified from photographs.
External Affairs Minister Sushma Swaraj called it a “happy day“ after meeting Geeta as the “innocent daughter came back home“. She said the government will do everything possible to reunite her with her family.
“I am very happy to be in India. My heart is filled with happiness. I am touched the way I am being welcomed. In Pakistan, I used to often feel sad,“ said Geeta, through a sign language interpreter, at a press conference along with Swaraj.
Till her parentage is established through DNA test, Swaraj said, Geeta will be put up at an institution for deaf and mute in Indore. “The Mahato family was selected on the basis of Geeta responding positively to their photograph. However, when she met them, she said they were not her family.“
At the Indore institution, run by Monica Arora who played Geeta's interpreter at the MEA interaction, Geeta will be provided skills to communicate. In reply to a question, Swaraj said Geeta did not accept the Mahato family's claim that she was already married and that she even had children.
Geeta was reportedly seven or eight years old when she was found sitting alone on the Samjhauta Express by the Pakistan Rangers 15 years ago at Lahore railway station. In Karachi, Geeta was given an emotional farewell as she boarded a plane. Eidhi Foundation head Bilqees Bano and other members of Geeta's foster family accompanied her to Delhi.
Swaraj steadfastly refused to comment if Geeta's return would help Indo-Pak ties. She also played down the demand by a Pakistan high commission official for early release of Pakistani prisoners.