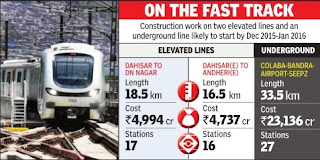 The Mumbai Metropolitan Region Development Authority (MMRDA) plans to start work on two elevated metro routes--Dahisar to DN Nagar and Dahisar(E) to Andheri(E)--by January .
It will be the first time the MMRDA initiates construction of a project on its own, a decision taken to speed it up. The MMRDA has decided to construct the viaduct for these two lines, which will cost around Rs.3,000 crore, and plans to later utilise bank loans for rolling stock and station infrastructure.
The state government has suggested a bhoomipujan for both lines on October 11, besides a bhoomipujan for the Ambedkar Memorial at Indu Mills, by Prime Minister Narendra Modi.
“More funds for the projects may come from the Japanese International Cooperation Agency (JICA), World Bank or Asian Development Bank, all of which have offered low-interest loans for the two corridors,“ Mantralaya sources said.
Mantralaya sources said the loans would be used only for rolling stock and station infrastructure. Navi Mumbai is already building an elevated metro based on the same financial model.
Work orders are likely to be issued to contractors for the two lines in the next four months as the bidding process will start this month after cabinet approval.
There are also plans to start construction of the underground Colaba-Bandra-Airport-Seepz metro around January . Bhoomipujan for this route was held last August.
Three of this route's 27 stations will run below the airport. Bids for the same saw participation by 31 firms. The financial bid will be opened on October 5.
The detailed project report of another line between Kasarvadavali and Wadala, via Thane and Ghatkopar, that will cost Rs.25,000 crore, is also being prepared.