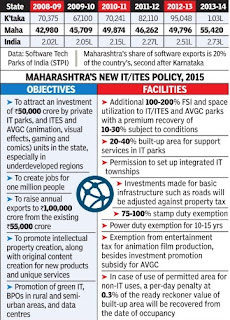 The Maharashtra state government wants to ramp up IT exports to bridge the gap with the country's leading software exporter, Karnataka. It has prepared a policy that promises several sops for IT and IT-enabled services (ITES) companies to set up shop in Maharashtra.
The state's annual IT exports are half its southern neighbour's. An official said Maharashtra's IT policy for 2015 offers an additional 100-200% FSI and space utilization to IT-ITES and AVGC (animation, visual effects, gaming and comics) parks, with a premium recovery of only 10-30%, subject to some conditions. The policy also offers 20-40% built-up area for support services in IT parks.Among the other sops are permission to set up integrated IT townships, adjustment in property tax of cost put in to develop roads and civic infrastructure, exemption in stamp duty of up to 100%, electricity duty exemption for the first 10-15 years, and relief in entertainment tax for animation film production.
Experts said the policy can attract investments of about Rs.50,000 crore and add Rs 1 lakh crore in exports for the state. IT expert Vijay Bhatkar said the state should have taken these steps 5-10 years ago, a little after the country's first IT park came up in Pune. “After the IT industry's inception in 1998, the growth rate of the software industry was 40-45%, which has now come down to 12-15%. Of course, recession, immigration problems and the economic crisis in Europe has affected business.“
After the introduction of IT parks in 2001, the state came up with a policy in 2003, wherein 253 IT parks with a built-up space of 3.90 million square metres obtained letters of intent to set up units. After six years, when another policy was introduced, nearly 212 parks with a built-up space of 8.93 million square metres came up in the state. The policies boosted Maharashtra's IT exports from Rs 5,508 crore (200203) to Rs.55,420 crore (2013-14), a growth of above 900%.
But these phases also coincided with massive expansions in Karnataka. Its IT exports, about Rs .12,500 crore in 2002-03, jumped 730% to reach over Rs.1.03 lakh crore by 2013-14.The latest policy is aimed at catching up with Karnataka and overtaking it as the country's IT leader.