1 crore homes give up LPG subsidy 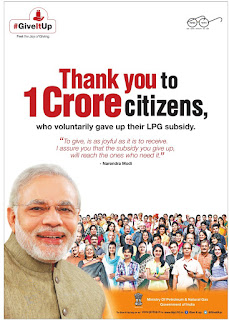 The number of households that have voluntarily given up subsidy on LPG (domestic cooking gas supplied in cylinders) crossed one crore, firing a shot in the arm of Ujjwala -the Modi government's scheme to provide gas connections free of cost to women from five crore BPL (below poverty line) families in the next three years.
The number of households surrendering subsidy represents over 6% of the total registered LPG consumer base and comes within a year of the PM's appeal. The pace of surrenders is an indication that the Modi magic is still working among cooking gas consumers, especially from the middle class who make up the bulk of the households that have foregone subsidy.
Modi had launched the `Give It Up' campaign on March 27, 2015. While inaugurating `Urja Sangam', a global energy meet, he appealed the economically well-off to voluntarily surrender subsidy and promised to give back LPG connections to poor households.
Till late Thursday afternoon, the government's website for Pahal -the scheme for cash transfer of cooking gas subsidy -said 1,00,06,303 households had voluntarily given up subsidy. But the number was changed to 99,06,410 later in the evening.Oil minister Dharmendra Pradhan is expected to announce the milestone number on Friday .
A subsidised cylinder costs Rs.419.13 in Delhi, while a non-subsidised refill for domestic use costs Rs.509.50. Consumers are currently entitled to 12 cylinders of 14.2 kg each in a year at subsidised rates.
The government intends to provide gas connection to 1.5 crore BPL households free of cost in this financial year. The number of surrendered subsidy covers two-thirds of this target and would make the government's task financially easier.
The Ujjwala scheme was announced in the budget, which earmarked Rs.2,000 crore for rolling out 1.5 crore BPL connections in this fiscal. Subsequently, the Cabinet on March 10 decided to expand the scope to five crore BPL connections in the next three years and earmarked atotal of Rs.8,000 crore.
The Ujjwala scheme will no doubt help improve women's health -especially in rural areas -and the environment. But it is also expected to yield rich political dividends for parties, making LPG the new vehicle for political outreach.